First off, I’m sorry it’s been nearly 3 months since the last post. It’s been VERY SLOW in north OC to start the year. I’ll try my best to not go that long again.

Before I get into this morning’s action, I’m going to go off on a little tangent, then circle back to the report.

If you have read any of my previous reports, the one there is one thing in the Overall Conditions above that should jump out at you….the Water Temp!!!! After many months of patiently waiting, the ocean surface temperature at the beach has made it up past 60 degrees. That is a HUGE difference maker. With that increase in temperature, we should now start seeing an sharp increase in fish bites and catches. We should also start seeing the return of sand crabs (sand fleas) to our local beaches. Grunion runs are now in the monthly calendar. With both sand crabs and grunion numbers on the increase, we surf anglers should know what that means…more and more species of fish will start to populate our shores in numbers for us to happily catch. We’re talking perch, yellowfin croaker, spotfin croaker, and corbina. Wait, I think I’m forgetting one REALLY important one. Hmmmmm…. Oh yeah. Duh. HALIBUT of course!!!!!!!!!!!!

Okay, now that I got that out of my system, back to today’s morning action. Okay, I know the title of the post kind of gives it away as to what I may or may not have caught, but I have to be honest. It has been something like 5 or 6 months since I last caught a halibut. But, that is completely intentional. Knowing how ocean water temperatures affect and dictate (for the most part) what fish are going to be available to catch, once the water dropped below 59 degrees, I stopped targeting halibut and focused on honing in my skills on the more abundant fish, like perch and yellowfin croaker. So, when I say it’s been 5 or 6 months since landing a halibut, it is purely for the fact that I didn’t target them.

When I go to the parking lot this morning, I walked across the jetty overpass to fish between the jetty and Seapoint. I like to fish on the other side where there are typically fewer surfers and other anglers – less fishing pressure. When I do this, I always with my Jigpara Micro and throw a few casts near the end of the jetty when it’s higher tide. There have been numerous trips where my first cast lands a little perch or yellowfin croaker. Unfortunately, nothing bit today. I spent the next 1.5 hours throwing the Jigpara, but nothing.

I then walked back to the jetty and saw that there were no other anglers fishing where I wanted to fish. It amazes me to see how many anglers are finishing or walking away from a spot at just the wrong time. What I mean by wrong time is that halibut like very little tidal movement when they feed and I completely agree with how they feel. Think about how much more energy you have to use when swimming if the water is moving really fast around you. You’re constantly having to fight and swim just to stay in the same spot. Halibut [mostly] feed at slack tide. So up to 30 minutes before and after a high or low tide is prime time to target this flat fish. Today, high tide was at 9:45am. I started casting my Lucky Craft Surf Pointer 115 in Metallic Sardine pattern at about 9:20am. I spent the next 45 minutes casting in a fan motion to cover as much surface area as possible. I looked at my watch and it was 9:59am. I told myself I had another 5 casts and then it was time to go.

Before I get into the actual catch, there 2 things I would like to note about using a Lucky Craft Flash Minnow 110 and a Lucky Craft Surf Pointer 115. First, these hard lures are measured in millimeters, so the 115 is slightly longer than the 110. The other MAJOR difference is the size of the spoon in the front that causes the diving action. The Surf Pointer 115 dives to 2 – 4 feet. The Flash Minnow 110 is for surface fishing of 0 – 2 feet. So, when it’s high tide as it was this morning, especially from standing on a jetty, I decided that it would be best to use the Surf Pointer 115 as it doves deeper and closer to the ocean floor where the halibut live and wait to ambush their prey.

Now, to the catch. I am a deep sea angler at heart. I grew up with a boat and have always fished. There are 2 main keys to fishing with a sardine: they don’t ever just swim straight and they don’t swim 100% of the time. They dart left, then right, then go straight, then stop, then left, then dive down. So on and so forth. Knowing this, I do not like to simply reel any lure or jig straight in. It is not a natural presentation.  When I retrieve my lures (swim baits, hard lures, jigs, etc), I vary my actions the whole time. I reel straight in, then pull it left, stop for a second or 2, pull right, then straight, then pull hard to make it dive hard (and variations of this on every cast). This varied action mimics real bait moving. Again, this is what works for me. Other anglers swear that a constant straight retrieve works for them. Do what you find works best for you. It can take MANY years of experience to find the right technique.

On what was going to be my last cast, I cast out to the middle of the jetty and started my retrieve. In no more than 3 seconds, my rod just pulled down. No hard bite, not pulling drag, nothing. I really thought I had just simply snagged some kelp and was dragging it. Over the course of the next 2 or 3 minutes, still, no drag pull, not head shakes, just constant rod bend. The only thing that made me realize it was a fish was that with kelp or seaweed, when you hook it, it will pull up to the surface with your lure and you’ll reel it in. I wasn’t seeing anything on the surface. It wasn’t until I reeled it in close enough to where whatever was attached to the lure shook a little after hitting the rocks of the jetty. Then I pulled up a little more and it was a site for sore eyes. FINALLYYYYYYYY. The first halibut in nearly half a year!

The best part is that I know it’s not [just] luck. When you are constantly watching swell patterns and water temperatures (I have also been surfing for nearly as long as I have been fishing) and you know what triggers certain fish species to start biting, it’s just a matter of patience. I picked the right day and time to start targeting the great flat fish (aka California Halibut)!!!

Until my next post, have fun and stay healthy! 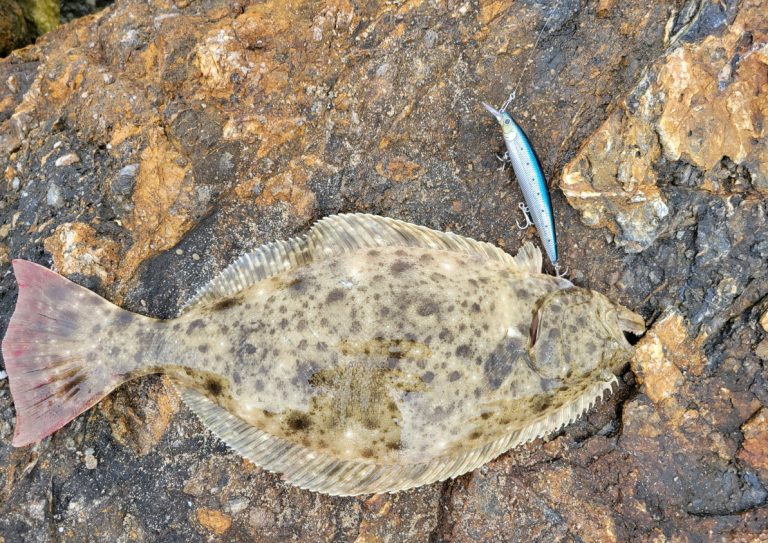 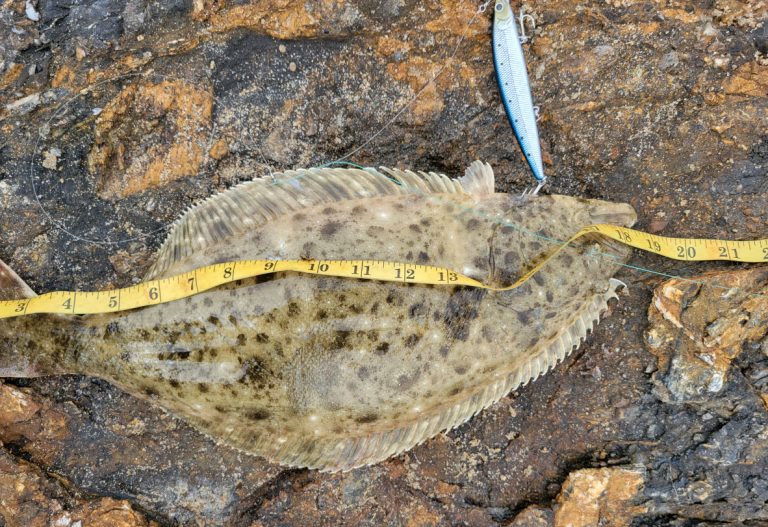 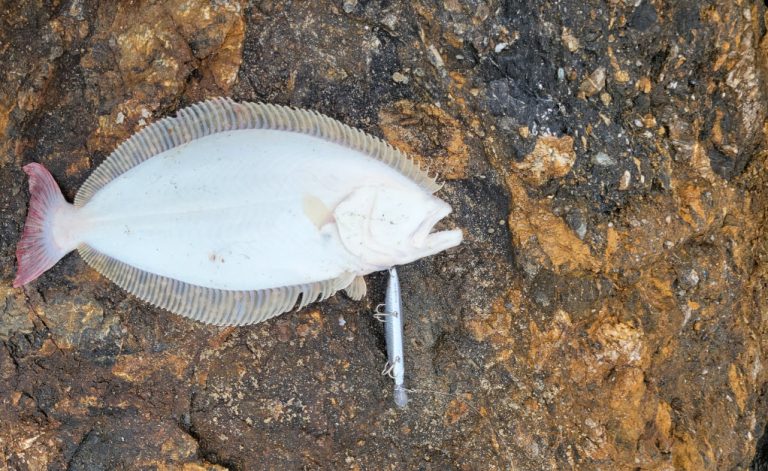