I want to start off by saying that the last week or so has definitely seen a drastic increase in “fishy” water. I am seeing TONS of anchovies and topsmelt in surf and jetty water.

With TONS of bait in the area, I am seeing corbina (this means sandcrabs are here), spotfin croaker, hundreds of stingrays, bat rays, butterfly rays, and, of course, the great flat fish – HALIBUT!!!

Now for my experiences the past week. On Saturday, I started the morning with a surf session early am. It only lasted about an hour as conditions weren’t all that great and I had to get home by 9am. So I stopped surfing and grabbed the fishing gear. There were other anglers all over the place. I managed to find a nice little area near the jetty at Bolsa Chica. Tide was quite low, so I was able to walk out quite far and fish in the outer surf zone. Weather and overall conditions were decent and a few birds were diving around me for the little anchovies.

The session only lasted about an hour and I was only able to snag this butterfly ray. It took me about 8 minutes or so to get in and was the biggest butterfly ray I have brough in. It probably weighed in at about 5 or 6 pounds. I thought it was a halibut at first, but after hooking into a few of these (and bat rays) over the last year, I quickly realized it was just a ray. I have noticed that nearly as soon as you hook into either a bat ray or butterfly ray, they either swim against the drift (parallel to the beach) or don’t fight at all and let you pull them right in. This was a beast of a ray and swam north against the drift for a while.

I was only using 6-pound test and a 15g Jigpara Micro, so I couldn’t pull hard to get it in. I had it to the shore 3 or 4 times and it would just keep running. I didn’t want to lose the jig of course, so I had to let it do it’s thing. I eventually got it in. That was it for that session. 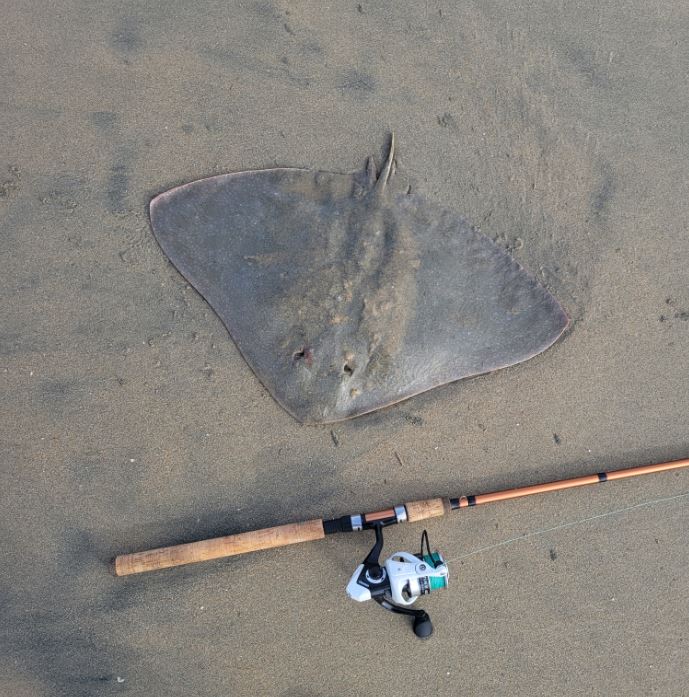 Monday was my next fishing session. After 2 hours, the only positive news was that I saw halibut breach the surface 6 times!!! How many did I hook???? NONE ☹. I used everything – Lucky Craft FM 110 in all colors, Jigpara Micro, ZOOM Super Flukes, Kalins grubs. Nothing! Skunked!

Tuesday was had a little more success. I tried using a dropshot rig with a ZOOM Super Fluke in a Smokin’ Shad color. The water was moving quite fast and my 3/8 ounce weight was being pulled quickly. I got bit one or two times and had 1 on for a couple seconds, but they were poor hook sets. That was it…for me. However, an angler that I had met last week (only able to fish on Tuesday mornings after his evening work shift) arrived about an hour before I had to leave. He walked up near me before he started fishing and told me about what happened last week after I left.

To quickly explained what happened last week – As I was leaving, I looked back just in time to see a halibut breach about 30 yards from where he was fishing. He hadn’t seen it, so I told him where it was and to just keep casting. So, he asked me if I remembered what happened and I nodded. He then told me that 3 casts after I was gone, he caught that halibut. He said it measured in at 27 inches!!! Nice! Great catch Peter!

Back to this Tuesday. Peter was only about 5 or 6 casts in before his hooks into a nice halibut. Fortunately, I had my GoPro running and was able to capture the bite, hook set, and landing of his flattie. It turned out to be slightly longer than we though and measured in at about 21 inches he said. It’s only 9 seconds long, but here it is:

That wasn’t the end of it though. Just as it happened last week, it happened again this week. The only difference is I saw it this time. As I was leaving, my back was turned to Peter for no more than 15 seconds. As I turned to take one last look, I see his rod it completely bent! I see him pull up yet another halibut!!! This one absolutely looked like a keeper. I had to go, but he texted me later that it too was just shy of legal and also measured in at 21 inches.

Wednesday was about the same as Tuesday. I mostly used a dropshot rig with flukes, grubs, swimbaits and Lucky Crafts. I did have 1 fish on for about 5 or 6 seconds, but again, poor hook set and it got off. That was it for the session.

Before I get into what happened today (Thursday), I want to note something that I was noticing about my dropshot rig that I did not like. With a dropshot rig, the hook (and therefore the bait) is tied into the fishing line. While the tail of the bait may move a bit with the water movement the lure as a whole appears very stiff and fixed in place. There is not much movement allowed. With no natural movement, I would be hard-pressed to believe a fish would like the look of it. I’ve seen a lot of YT videos with anglers having success with the standard dropshot, but I just don’t like presentation. There needs to be more movement.

As I was swiping through fishing post on IG, I came across an image for a Tokyo Rig. Go ahead and search on the internet for “Tokyo rig”. What you will see is basically a rig with 2 barrel swivels connected to a split ring at the hook. One barrel is connecting the main line to the hook and the other is hooked to a line hanging down for the weight. What this does is allow the lure to freely move in a much more natural way.

I decided to order some split rings and size 2 barrel swivels. I didn’t want to wait until they got delivered to test the rig out. I tied a line clip on my main line and clipped it to the eye of the hook and tied the line with the weight onto the hook itself. They eye of the hook is plenty big to where the lure on the hook is able to move freely. It’s not pretty, but the same concept is there to match the Tokyo Rig.

Now, to today’s session. It didn’t take but 2 casts for my theory to prove correct. I cast out, wait for the weight to hit the ground. It only took a couple of jogs before BOOM!!! FISH ON!!! Finally! This was the first fish I have had on that has actually pulled drag on me in over 6 months. I did have a couple more bites with one lasting about 3 seconds before coming off.

Instead of explaining the whole catch, I figured it would be best and more enjoyable to watch it. After all, this is exactly why we invested in a GoPro. Enjoy the video (2 still images of the catch are below the video player). 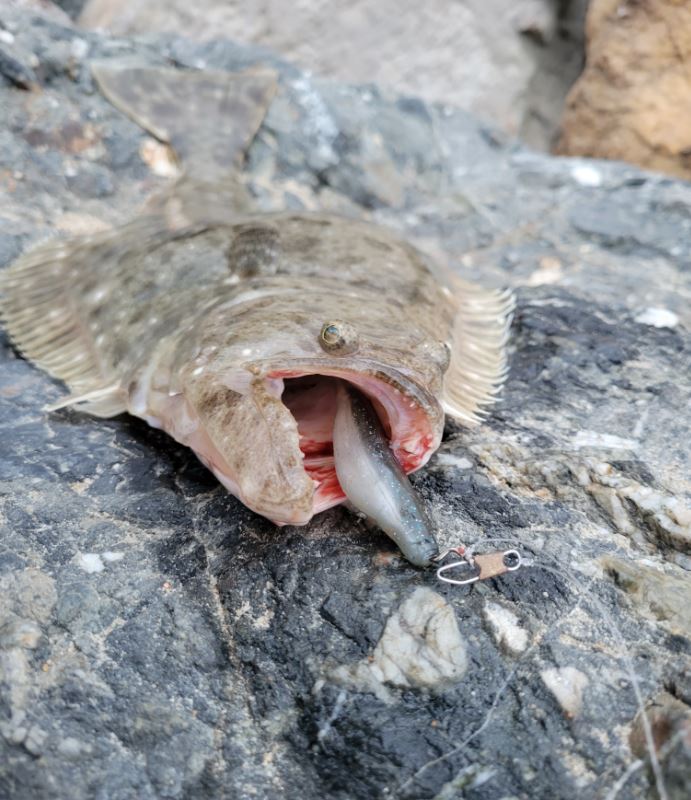 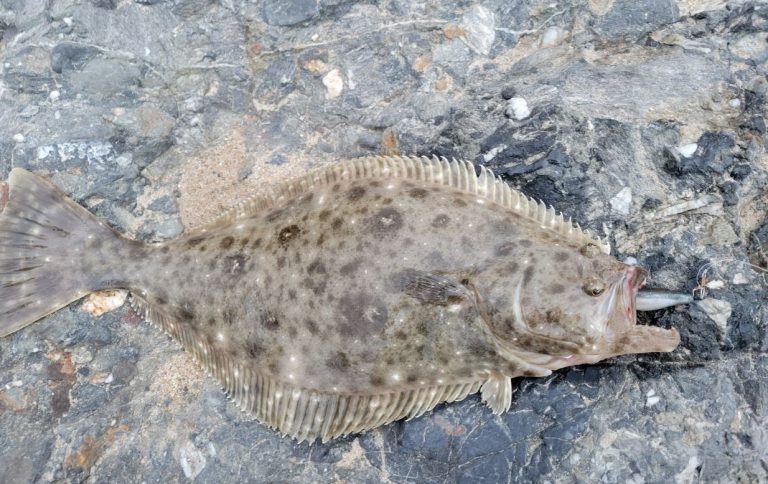